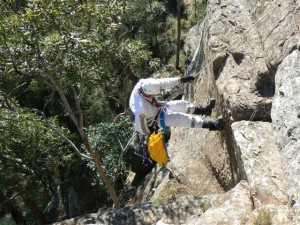 The Cessnock District VRA Rescue Squad is accredited by the NSW State Rescue Board (SRB) as the primary rescue unit for the vast majority of the Cessnock Local Government Area (LGA). The members of the squad are available to respond 24 hours a day, every day to any emergency incident. The squad attends incidents such as motor vehicle collisions, industrial and domestic accidents, searches, accident and crime scene illumination, vertical rescue incidents, animal rescues, inland water rescues, storm and tempest incidents and many others. The squad also provides any assistance as requested by Police, Ambulance, Fire or any other authorised organisation. The squad has been affiliated with the NSW Volunteer Rescue Association (VRA) since 1986 and existed under other titles for ten years prior to that, resulting in over 35 years and thousands of hours of voluntary service within the Cessnock District.

In relation to animal rescues, we have attended such rescues as ducks in walls, cows in mud, horses in septic tanks and the list can go on.
Our volunteers are caring people who will rescue most animals that are in distress, trapped or stuck in something etc.
When you search for animal rescue in our area, our name will come up as it is a service that we provide to the community, but some members of the public are searching for animal rescue centres that re-home animals or are drop off centres.
Unfortunately we are not an animal rescue centre in that regard, we do not re-home or are we a drop off centre for pets, there are other organisations that offer those services.

As with all VRA units throughout NSW the Cessnock District VRA Rescue Squad is a voluntary unit with all members receiving no financial payment for their service. Unlike all other emergency services within NSW the VRA squads are not fully government funded and are therefore responsible for raising the vast majority of funding required to continue operating.

*For more detail regarding how to donate to the Cessnock District VRA Rescue Squad click here. 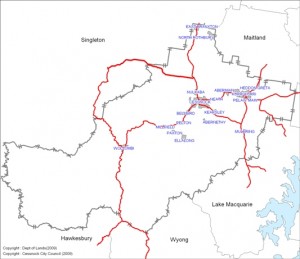 The squad’s accredited primary response rescue area is very large, approximately 1800 kms² and covers the vast majority of the Cessnock LGA. For many years the squad covered the entire Cessnock LGA, however when the Branxton Fire Brigade became accredited by the SRB they were appointed primary response for the North Rothbury area. Even with the removal of this area the squad’s coverage is roughly bordered by the following towns

Within this area there are hundreds of kilometres of roads ranging from dirt trails to major arterial roads, train lines, an airport, industrial premises, waterways, multi-story buildings and dense bushland including three national parks. Such a variety of geographical and demographical features highlight the vast array of possible incidents the squad must be prepared to attend at any time.

Read more about the roles VRA takes on in our community & how you can help us.