Squad roles in the community

Apart from its primary rescue accreditation for the above mentioned duties throughout the Cessnock LGA, the squad is also the primary accredited vertical rescue unit for the Watagan National Park and a large portion of the Barrington Tops National Park.

Although not common place, vertical rescue is a very specialised facet of rescue requiring the highest levels of training and “state of the art” equipment. A vertical rescue is any incident where the use of specific roping techniques and equipment are required to lift or lower a person from an area that is otherwise inaccessible, such as a cliff face or building. 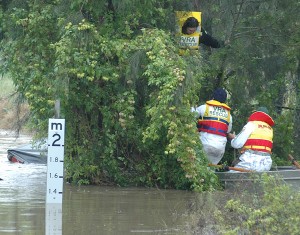 Common storm and tempest incidents include objects such as trees, tree branches, TV aerials, lawn lockers, awnings and roofs blown over or damaged by strong winds, leaking roofs or flash flooding caused by heavy rain or damage to structures from hail.

Throughout its 35 year history the Cessnock District VRA Rescue Squad has enjoyed an excellent working relationship with all allied emergency services. The squad is among the best equipped and trained rescue units in NSW and is held in the highest regard by all other emergency service organisations.

Squad members regularly work side by side with personnel from all other emergency services at a wide variety of incidents.

The high regard in which the Cessnock District VRA Rescue Squad is held by the allied emergency services is evidenced by several requests made throughout its history. The squad has been requested to supply members and equipment to major incidents outside of its accreditation area on numerous occasions as listed below

“Let’s not meet by accident”

The operational capacity of the Cessnock District VRA Rescue Squad is such that throughout all of the above stated incidents the squad’s core role of providing primary response rescue services for the Cessnock LGA was never impeded.

The motto of the NSW VRA is “A helping hand, anywhere, anytime” and whilst all NSW VRA squads are trained and equipped to fulfil this statement, the Cessnock District VRA Rescue Squad’s motto is “Let’s not meet by accident” because we would prefer our skills and equipment not be required.

Please take the time to explore all the other links to find out more about the Cessnock District VRA Rescue Squad.