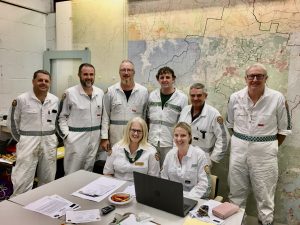 Tonight Cessnock District Rescue Squad held our AGM.
We would like to thank our special guests for the evening, NSW VRA commissioner Mr Mark Gibson as well as NSW VRA manager for wellbeing and chaplain Mr Ray Lotty.
A big thank you to our life members David Bain, Kerry Milgate and Jason Sattler for their assistance with scrutineering during the voting process.
We also need to pay a special thank you to Connie Spinks Consulting, who has once again provided her services to the squad at no charge, and has done so for many years.

We would like to congratulate those who were successful in obtaining new positions or re-elected in their current roles.

The 2020 successful nominees are as follows.

We also need to make special mention of Trevor Milgate, for the first time since 1978 he has not put himself forward to run for an internal position of CDRS. He and his wife Kerry have been an integral part of this squad, and although they are beginning to take some steps back, we are still proud to have them as part of our team.

We look forward to another year of servicing our community.

In the attached picture we have the following executive position holders.